Outdoor lighting requires different types of bulbs than those used for indoor lighting. They serve in a variety of applications, such as lighting of streets, parking lots, sports fields, and home security. These lamps often need to be brighter and be able to withstand outdoor environments.  There are a variety of outdoor lighting types and each have their pros and cons. 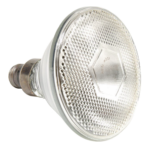 Mercury Vapor – At one time, mercury-vapor lamps were widely used for streets, parking lots, and even outdoor home lighting, but they were banned in the US in 2008. Mercury-vapor lamps produce light by sending an electric arc through vaporized mercury. The arc discharge occurs within a small fused quartz arc tube mounted within a glass bulb. Mercury vapor lamps are more energy efficient than incandescent and most fluorescent lights. They produce white light with a bluish-green tint, which is not flattering to human skin color. 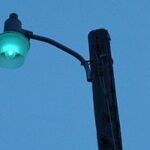 Metal Halide – Metal halide lamps are typically used as streetlights, in parking lots, and for stadium lighting. They produce light by sending an electric arc through a gaseous mixture of vaporized mercury and metal halides. They are very bright and are big contributor to light pollution. They are fairly efficient, producing a very white light with good color rendition. 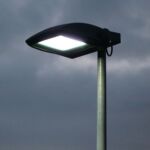 High-Pressure Sodium – High pressure sodium (HPS) lamps are probably the most commonly used street light throughout the world. They work by passing electricity through sodium vapor to produce light. These lamps are often chosen because they are fairly efficient and they require very little maintenance. They are slow to turn on completely and produce a yellow-orange glow, which is their biggest disadvantage. The orange light interferes with astronomers’ ability to make measurements of distant stars. They also have poor color rendition. 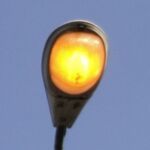 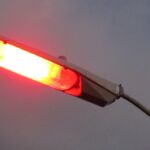 LED Lights – Recent improvements in LED technology have made it possible to produce LED lights for use as street lights and other outdoor lighting applications. The energy savings are significant. However, the biggest drawback is the production of blue light, which can have negative effects on the health of humans and wildlife. To avoid this problem, choose outdoor LED bulbs with a color temperature of 2700 K or below. 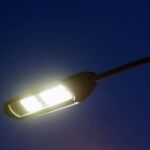 Phosphor-Converted Amber (PCA) LED Lights – PCALEDs have only been on the market for a few years. PCALEDs use a phosphor to convert blue light to green, yellow, amber, and red light. While they appear amber in color, they have much better color rendition than high-pressure sodium. Because they produce very little blue light, they are a good choice to help preserve the dark night sky. They have a much lower impact on animals compared to white light. 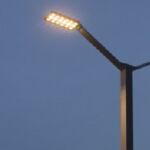 Narrow-Band Amber (NBA) LED Lights – Narrow-band amber (NBA) LED street lights are a recently developed technology. They emit primarily yellow-amber colored light directly, without using a phosphor like that used in PCALED lights. They have a lower color rendition than PCALEDs, but they produce less interference with astronomy. They are also the preferred lighting solution for endangered species, such as turtles, that are affected by light at night. However, because they can experience significant thermal instability, causing light output to diminish over time, they have not achieved significant market penetration. 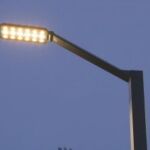