There is no clear scientific evidence that increased outdoor lighting deters crimes. It may make us feel safer, but has not been shown to make us safer.

A 2015 study published in the Journal of Epidemiology and Community Health found that streetlights don’t prevent accidents or crime, but do cost a lot of money. The researchers looked at data on road traffic collisions and crime in 62 local authorities in England and Wales and found that lighting had no effect, whether authorities had turned them off completely, dimmed them, turned them off at certain hours, or substituted low-power LED lamps.

According to the study, “[W]hen risks are carefully considered, local authorities can safely reduce street lighting saving both costs and energy … without necessarily impacting negatively upon road traffic collisions and crime.”

According to a 2011 study of London street lighting and crime, there is no good evidence that increased lighting reduces total crime.” A 1997 National Institute of Justice study concluded, “We can have very little confidence that improved lighting prevents crime.”

The truth is bad outdoor lighting can decrease safety by making victims and property easier to see. A Chicago Alley Lighting Project showed a correlation between brightly lit alleyways and increased crime.

In fact, most property crime occurs in the light of the day. And some crimes like vandalism and graffiti actually thrive on night lighting.

A dark sky does not necessarily mean a dark ground. Smart lighting that directs light where it is needed creates a balance between safety and starlight.

Brighter Does Not Mean Safer:

According to a 2012 report of the American Medical Association, “Glare from nighttime lighting can create hazards ranging from discomfort to frank visual disability.” 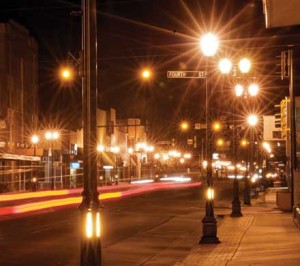 Outdoor lighting is intended to enhance safety and security at night, but too much lighting can actually have the opposite effect. Visibility should always be the goal. Glare from bright, unshielded lights actually decreases safety because it shines into our eyes and constricts our pupils. This can not only be blinding, it also makes it more difficult for our eyes to adjust to low-light conditions.