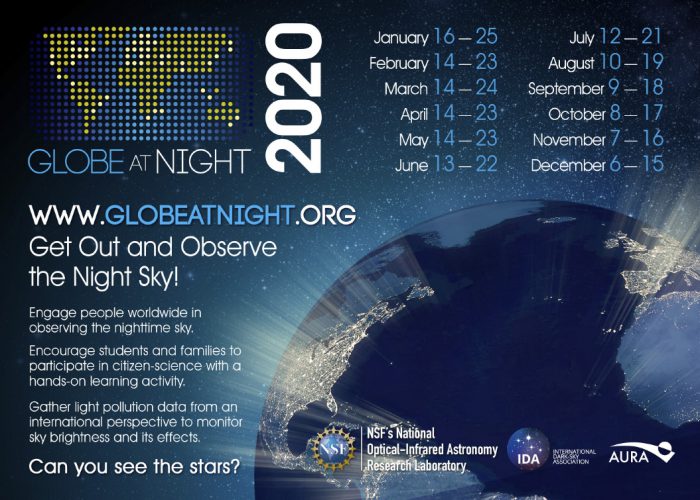 Due to light pollution, the night sky over many of our cities is hundreds of times brighter than a natural, starlit sky. This skyglow hides the stars from our sight and prevents us and all life on Earth from experiencing a natural night, even in areas hundreds of miles away from urban development.

An important part of solving the problem of light pollution is to have a thorough understanding of its magnitude, and a great way to do that is to measure the brightness of the night sky. Thankfully, it is relatively easy to make such measurements, and you can help.

Participating in the Globe at Night citizen-science campaign is a great way to help our understanding of skyglow and its impact. No special tools are required and observations can easily be reported by smartphone, tablet or computer.

It’s also possible to use your smartphone to make night sky brightness measurements. The Dark Sky Meter app makes use of the iPhone camera to record the brightness of the night sky, while the Loss of the Night app walks the user through the sky as measurements are made with a different sensitive tool – the human eye. It’s available for both Android devices and iPhones. And now, thanks to the MySkyatNight project, you can also do your own analysis of all this available data.

Another way you can help is by participating in the Cities at Night project, which relies on citizen scientists to map and identify photos of cities taken from the International Space Station. This valuable information helps researchers better assess light pollution across of the globe.

In addition to the smart phone apps and the Globe at Night project, more rigorous, long-term monitoring is also being conducted. The section below describes standards for collecting and reporting skyglow measurements.

The introduction of the Sky Quality Meter and the International Year of Astronomy Lightmeter have led to a large number of permanent online skyglow monitoring stations. At the same time, a number of individuals and groups have developed their own non-commercial devices for measuring skyglow.

While these developments are excellent news for those interested in monitoring light pollution, there isn’t yet a common standard for recording measurements from these devices. This has greatly hampered efforts to compare measurements from different locations, and to develop databases containing long-term measurements from around the world.

At the Cabauw Lightmeter InterComparison (CLIC) workshop in May 2012, a group of light pollution researchers defined a proposal for a new standard format to be used for recording skyglow measurements (see links below). The goal of the standardization is to make comparisons of future measurements easier, regardless of whether the measurements were taken using currently available detectors or by new detectors. For this reason, the community has designed a format that hopefully anticipates the needs of potential future devices (e.g., multiple channels with different filters or opening angles), but without making the format so open as to not actually be helpful.

The Comal County Friends of the Night Sky was formed in April, 2020 by a group of concerned residents who first met using Zoom. We are working on several initiatives to facilitate night sky friendly lighting in order to preserve and improve the stunning night sky of the Texas Hill Country and Comal County, TX.