It is a wonderful thing to be able to walk into a room at night, flip a switch, and have the room completely lit up. However, most great inventions have an advantage and a disadvantage, an upside and downside, especially when it is overused or misused. The disadvantage of nighttime outdoor lighting is light pollution.

Here in Comal County, if you look to the east or to the south at night, you will see a bright, orange glow in the sky. That is light pollution and, unlike other forms of contamination and waste, it remains largely overlooked and unregulated in most countries. The problem has been growing ever since Edison invented the incandescent light bulb. This article will discuss the causes, types, and effects of light pollution. We will also look at ways that you can adjust your outdoor lighting and habits to reduce light pollution.

What is Light Pollution?

The definition of light pollution, also known as photopollution or luminous pollution, is the excessive, misdirected or invasive use of artificial outdoor lighting. Light pollution is responsible for altering the color and contrast of the nighttime sky, making it difficult or impossible to see natural starlight. It also disrupts circadian rhythms (the 24-hour pattern exhibited by most plants and animals), which affects the environment, energy resources, wildlife, humans, and astronomy.

Light pollution is caused by using outdoor lighting improperly or when and where it is not needed. There are many examples where poorly installed residential, commercial, and industrial outdoor lighting contributes significantly to the pollution problem. More than 50% of the light from an unshielded light fixture is projected sideways or skyward. Frequently, less than 40% of the light emitted actually illuminates the ground. 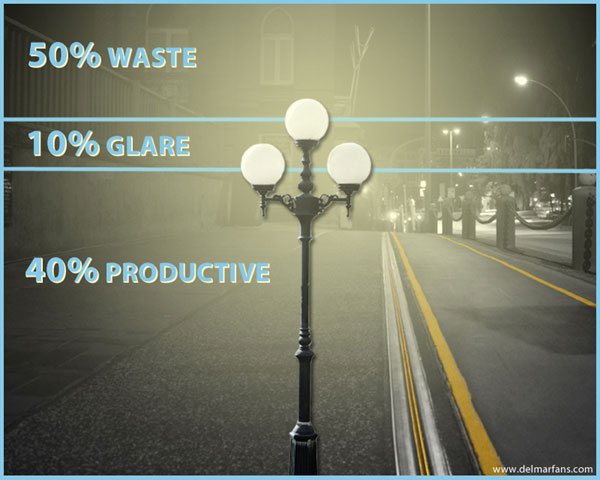 Side Effects of Light Pollution

Environment – The International Dark-Sky Association (IDA), estimates that excessive nighttime lighting is responsible for releasing more than 12 million tons of carbon dioxide into the atmosphere each year. Light pollution also contributes to air pollution. According to a 2010 study by the National Oceanic and Atmospheric Association (NOAA), photopollution suppresses the naturally occurring nitrate radical. The nitrate radical, a form of nitrogen oxide, breaks down vehicle and factory emissions during the night, a process that prevents the emissions from becoming smog, ozone pollution, or other irritants. Because sunlight destroys nitrate radicals, the process only takes place at night. However, artificial lighting also decreases nitrate radicals, which slows the cleansing process by as much as 7%. Light pollution also increase the amount of chemicals that contribute to ozone pollution by 5%.

Energy – Wasted light wastes energy. According to a 2007 IDA study, an estimated 30% of light emitted by outdoor light fixtures is wasted. That amounts to 22 terawatt-hours (22 quadrillion or 22,000,000,000,000 watt-hours) per year of wasted electrical energy, enough energy to illuminate over 11 million homes and power over 777,000 cars.

Wildlife – Light pollution affects the feeding, sleeping, mating, and migration habits of all wildlife. When there is excessive artificial light at night, wildlife can become disoriented. Animals experience difficulty foraging for food at night. Excessive illumination causes night vision impairment, which increases exposure to natural predators and increased mortality. A decline in reproduction leads to a shrinking animal population. Many birds depend on moonlight and starlight to hunt and migrate at night and artificial light disrupts these patterns. Artificail lighting prevents female sea turtles from finding safe nesting areas to lay their eggs. Sea turtle hatchlings, which instinctively use moonlight and starlight to crawl toward the ocean, often wander away from the ocean due to artificial lighting and are eaten by predators, run over by vehicles, or die from dehydration or exhaustion. Artificial lights may also disorient other nocturnal reptiles. Insects such as moths are naturally attracted to light and may use all their energy to stay near a source of light. This interferes with mating and migration as well as makes them vulnerable to natural predators, which reduces their population. This also affects other species that rely on insects for food or pollination.

Astronomy – While light pollution interferes with our ability to view of the night sky and stars, it is extremely detrimental to astronomers. Photopollution and sky glow makes viewing faint celestial bodies with a telescope very difficult. Astronomy has made countless contributions to technology, the economy, and society, including personal computers, communication satellites, mobile phones, Global Positioning Systems (GPS), and solar panels. In order to conduct their work and research, astronomers need dark skies.

Humans – Just like plants and animals, human are regulated by circadian rhythms, the physical, mental and behavioral changes that occur in a 24-hour cycle. The circadian clock regulates physiologic activities such as brain wave patterns, hormone production, and cell regulation. The rhythms respond to the light and darkness around an organism. Disrupting these rhythms can result in a variety of health problems, including sleep disorders, anxiety, depression, diabetes, cancer (particularly breast and prostate cancer), cardiovascular disease, immunological disorders, and obesity.

Melatonin, the naturally occurring hormone that regulates the sleep and wake cycle, is acutely affected by light pollution. The hormone is activated by darkness and repressed by light. Melatonin deficiency can result in anxiety and mood disorders, insomnia, and elevated estrogen/progesterone ratio.

In 2009, the American Medical Association (AMA) unanimously supported the reduction of light pollution, and advocated the development of energy-efficient outdoor lighting to reduce glare and energy waste.

Light Pollution can occur in a variety of ways. One light source can exhibit multiple types of pollution. Here is description of the ways light pollution can impact us.

Light Trespass – Light trespass, also known as spill light, occurs when illumination from a light fixture is projected beyond a property line. Light trespass unintentionally illuminates other homes, businesses, and other areas. There are no guidelines to determine when, where, or how much spill light is unwanted. Examples of light trespass includes light from a nearby streetlight shining through a window and lighting up a bedroom, light from an outdoor wall light projecting light towards the sky rather than towards the ground, and light from a neighbor’s floodlight or security light shining over the fence and lighting up your property. 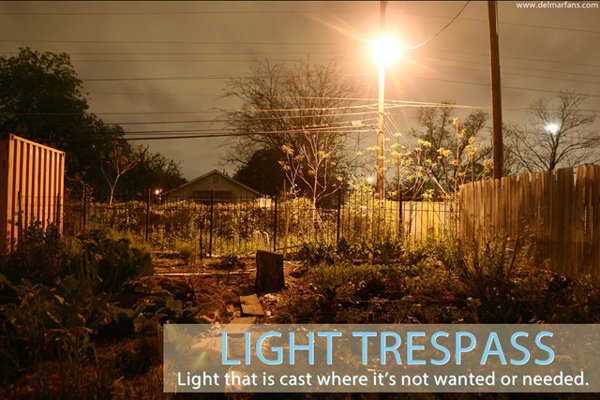 Glare – Glare is the visual sensation you experience when stray light in your field of vision is greater than the light to which your eyes are adapted. Depending on the intensity, glare can cause deminished contrast, reduced color perception, and decreased visual performance. There are three types of glare. Discomfort glare,also known as psychological glare, is the most common type of glare and occurs when lighting causes annoyance or irritation, but does not decrease visual performance and physical discomfort is short term. Disability glare, also known as veiling glare, occurs when stray light scatters in the eye and produces a veil over the retina, which affects visual performance. Veiling glare, which reduces contrast, color perception, and spatial awareness, can lead to unsafe driving conditions. Older drivers are more prone to experience disability glare. Blinding glare, also known as absolute glare or dazzle, is when a light source impairs the field of vision, preventing the eye from seeing anything but the light source. Visual performance may remain affected for some time well after the glare occurs. 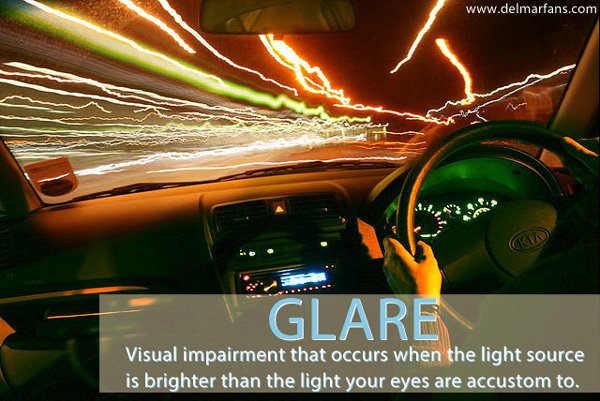 Sky Glow – Sky glow can originate from both natural and artificial sources, but mismanaged man-made lighting is the primary source of sky glow. Sky glow is caused by light being emitted directly into the sky where it is scattered by dust and gas molecules, creating an orange glow in the night sky. Sky glow decreases the ability to see the stars, planets, and other celestrial bodies in the sky by reduces the contrast between them and the the sky. Sky glow domes are visible above cities and towns around the world. Smaller domes are visible above over-lighted commercial areas and sport stadiums. The amount of dust and gas molecules in the sky, as well as cloud coverage, snow, and trees can exacerbate sky glow. According to the National Park Service, sky glow from major cities can be seen more than 200 miles away from in many national parks.

Light Clutter – Light clutter is the excessive grouping of bright lights. It causes confusion and distracts from oncoming or surrounding objects. Unshielded street lights and brightly-lit signs, billboards, and advertisements contribute to light clutter along roadways. Light clutter can create a hazardous situation for drivers and pilots because it competes with traffic and navigation signals. Clutter contributes to other types of light pollution, including light trespass, glare, and sky glow. 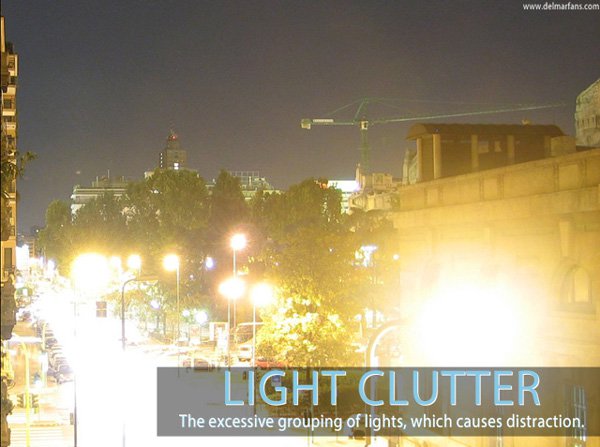 Now that you know what light pollution is and the problems it creates, how do you go about reducing light pollution in Comal County? The answer can be found on our Lighting Guidelines page.

The Comal County Friends of the Night Sky was formed in April, 2020 by a group of concerned residents who first met using Zoom. We are working on several initiatives to facilitate night sky friendly lighting in order to preserve and improve the stunning night sky of the Texas Hill Country and Comal County, TX.