It used to be that all you needed to know when buying a light bulb was whether you needed a 60-, 75-, or 100-watt bulb, and maybe whether it was clear or frosted. Nearly everyone had an idea of how much light these bulbs put out. However, with the advent of the compact fluorescent light bulb (CFL), and now the light-emitting diode (LED) bulb, wattage is no longer a reliable indication of brightness. A CFL or LED can output the same amount of light using only 20% to 25% as much energy. So you need to be looking at other measurements when selecting the new style of light bulbs. There are three main things to look for: brightness, wattage, and color. There may be other things you that are of interest to you. So here is a quick rundown of light bulb basics.

Wattage – The unit for measuring energy is the watt. Wattage indicates the amount of energy a device uses. Choosing lower-wattage bulbs can help lower your electric bill. CFLs and LEDs use less energy (lower wattage) than incandescent bulbs, while emitting the same amount of light. For example, a 60-watt incandescent light bulb emits about 800 lumens. A CFL with an output of 800 lumens consumes only 13 to 15 watts, while an LED of the same brightness consumes only 8 to 12 watts.

The Kelvin Color Scale – The Kelvin scale is a temperature scale in which its zero point is absolute zero, the temperature at which all thermal motion stops, -273.16° Celsius. The scale is named for William Thomson (who later became Lord Kelvin). Thomson wrote a paper in 1848 on the need for an absolute temperature scale. Until 1967, the unit on this scale was a degree Kelvin (°K) and was the same size as a degree Celsius (°C). That year, the General Conference on Weights and Measures (CGPM) dropped the term “degree” and redefined the absolute temperature unit as the kelvin (K). So now it is correct to say that the freezing point is 273.16 kelvins, not 276.16° Kelvin. It is written as 273.16 K, with a space between the number and the letter.

In our lighting guidelines, we specify bulbs with a color rating of 3000 K or lower—2700 K is preferred. Manufacturers sometimes use descriptive terms instead of numbers. Unfortunately, these names and their ranges vary from one manufacturer to another, and sometimes overlap. The names should be used only as a guide and choice of color should be made using the actual CCT value. We recommend only the soft white for outdoor lighting. However, some of the others may be appropriate for some indoor lighting. Here is what these terms mean.

Daylight – 5000K – 6500K (blue range). These are good for reading. The term daylight refers to an artificial light that is supposed to simulate actual daylight. Despite the name, these bulbs tend to be bluer than real daylight. The color of natural daylight is 5600 K on a sunny day at noon.

Efficiency – Although efficiency and efficacy are sometimes used interchangeably, technically they are not the same. Efficiency is the amount of light energy produced by a light bulb compared to the electrical energy that it uses. Unlike LED bulbs, most of the energy used by an incandescent bulb is converted to heat rather than light. Efficiency is the percentage of output divided by input. Inefficient bulbs waste energy and produce less light.

Efficacy– Efficacy is related to efficiency and indicates how much light is emitted for a given amount of energy used. It is the number of lumens output by the bulb per watt of energy input (lumens/watt). Efficacy is sometimes indicated on the bulb label, but if not, you can calculate it by dividing lumens by the number of watts. However, for simplicity just remember a CFL is much more efficient than an incandescent bulb, and LEDs are a little more efficient than CFLs. It is sometimes called luminous efficacy.

Energy cost – This is the estimated cost to operate a given light bulb for a year. These calculations usually assume that the bulb will be on an average of 3 hours per day and the electric rate is $0.11 per kilowatt-hour. Obviously, if you use it more or less than 3 hours a day, the actual cost would be different. It also depends on how much your electricity provider charges. Here in Comal County, the rate is about $0.10 per kilowatt-hour.

Equivalent – For many years we have been buying incandescent bulbs based on wattage and generally have a rough idea of how much light a bulb of a given wattage emits. Some manufacturers show a wattage equivalent on their packaging. Just remember this information is just a guide to help choose a bulb with the right brightness. The actual wattage for CFL and LED bulbs with the same brightness is much lower than this equivalent number.

Other Criteria – Other measurements are sometimes presented on bulb labels. Most of these are of little concern to the average user and we will not go into those here.

Lighting Facts – Manufacturers of lighting products are now required to provide labels with certain information on their packaging. Examples of two of these labels are shown below: 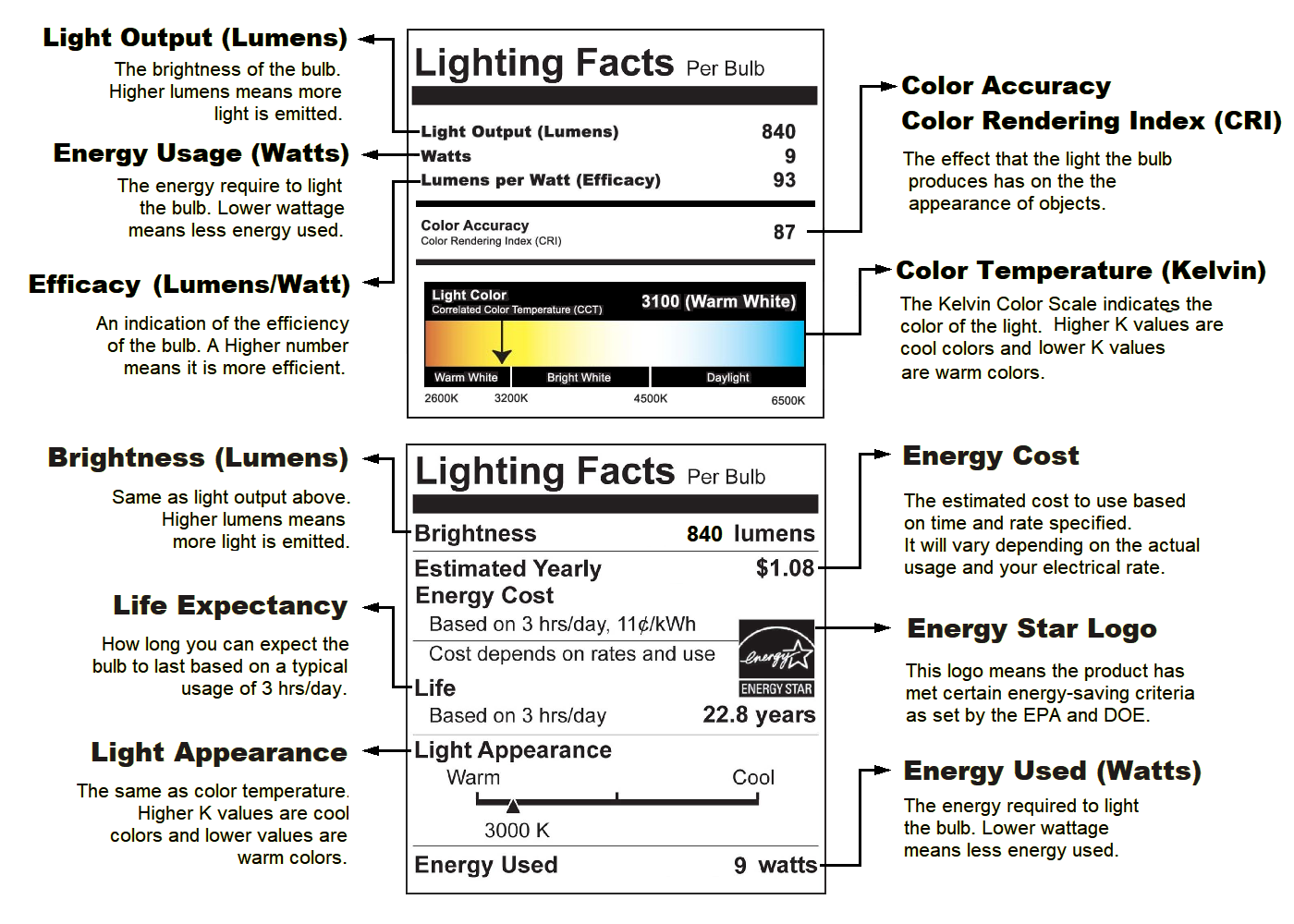