Until recently, almost all indoor light bulbs were incandescent bulbs, the traditional light bulb. Today there are newer designs that are more efficient and in some cases provide better lighting. The various type of bulbs are discussed below. Before looking at these, you may want to look over the definition of some of the terms found on our Light Bulb Basics page.

Incandescent Bulbs – The incandescent light bulb has had essentially the same design for over 100 years, ever since it was invented by Thomas Edison. It produces light by passing electricity through a filament, a thin wire made of tungsten, until it glows. Because they release a lot of heat, they are hot to the touch and are very inefficient. This type of bulb has been banned in many countries, including the US, because they are so inefficient. 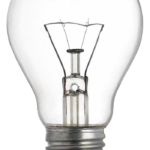 Fluorescent Tubes – Fluorescent tubes produce light by running electricity through a gas, which causes the phosphor coating inside the tube to glow. These bulbs are much more efficient than incandescent bulbs, but are more expensive to install. Because of this, they tend to be used more often in office buildings, warehouses, workshops, and retail stores rather than in homes. Newer style fluorescent tubes are more efficient than the older ones. 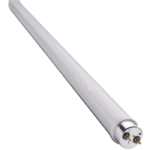 Compact Fluorescent Light (CFL) Bulbs – These bulbs are essentially smaller versions of fluorescent tubes that are spiraled to make them more compact. Like their larger counterparts, they are are far more efficient and run much cooler than standard incandescent bulbs. 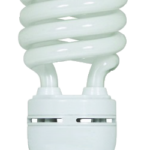 Light Emitting Diode (LED) Bulbs – LEDs use a new type of technology and their invention won the Nobel Prize in Physics in 2014. Although these bulbs are the most efficient bulbs available today, they are not without problems. Some LEDs have a lot more blue light than others. Blue light can have have negative effects on human health and wildlife. To avoid this problem, choose LED bulbs with a color temperature of 2700 K or below. 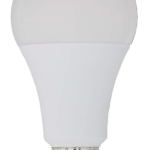